For my next puzzle, I chose the one my sister gave me for my birthday last year. This one was unique in that it included a stand for the box top for ease of seeing the finished picture…

But I decided to take a different approach to assembling it. Rather than spreading all 1,000 pieces over my work surface trying to organize them by color, I decided to “fish” out the edge pieces first and then with just them on the table, assemble them to frame the puzzle. This worked out well only having to return to the “pond” to fish out a few more as I assembled. Once I had almost completed the edges, I was amazed that I was only missing three edge pieces.

I next took another unique approach. Again, rather than laying out all the pieces, I decided to start with the cars which were both red, pieces that should be easily identifiable. I left all the pieces in the box and much akin to “panning for gold,” I gently shook the box and pulled out the red pieces as they turned up. I also noticed there were a number of pink and green pieces that kept surfacing and so I decided to pull out and segregate them also.

This strategy seemed to feel less overwhelming, as is often the case when starting with all 1,000 pieces scattered around the work area. With fewer pieces on which to focus my attention, I was amazed at how fairly easy it was to assemble the two cars along with some associated pieces. And whenever, I got stuck, I would “pan” for some pieces and interestingly they would typically turn up.

At this point, I decided to fish out all of the blue and purple pieces as assembling the garage door would remove a large number of pieces from my pool. 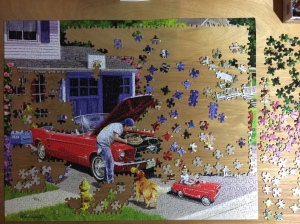 This worked out well and allowed me to locate some additional car pieces as well.

I next decided to focus on the large number of pink pieces that I had segregated since a large flowering pink bush was a prominent feature in the center of he puzzle.

I then realized that many of the light green pieces were connected to these pink pieces and since these were together in one place, was able to easily add them. This then led to assembling the house at the top right of the puzzle.

Sitting back, I enjoyed seeing the finished product, a nice springtime scene on a cold and rainy winter day—in fact the first day of winter, December 21st.

So in exactly two weeks, I had assembled two puzzles to kick off my winter puzzle season.

I didn’t get back to puzzling until a couple of days after Christmas. I decided for my next puzzle I would work on my beer label puzzle—what better way to ring in the New Year than to celebrate looking at about 100 beer labels? Turns out it took me right up to New Year’s Day to finish as this was one of the hardest puzzles I assembled during my winter puzzle binge.

I figured finding all of the edge pieces would be fairly easy since in addition to having one flat edge, these pieces were more distinctive as they had a red band on them. I used the same technique as before and “panned” for them out of the box before placing any other pieces on the work surface. Once pulled out, it wasn’t too difficult to get them together. But once I started removing all of the other pieces, my work surface wasn’t even large enough to hold all the pieces and some had to remain in the box.

I started out trying to build from the bottom up but it was much akin to looking for that one in a thousand piece, a very slow and tedious process. I next began assembling some of the more distinctive labels, ones with unique colors, patterns, or text and placing them in various places around my work surface.

After assembling about a dozen separate labels, I began again starting at the bottom drawing from a much-reduced pool of pieces.

As I made my way up the puzzle, in spite of my best searching efforts, I couldn’t finish each label before moving on to another. I realized with all the holes in between that I was actually building a ladder of labels from the bottom up. Initially my goal had been to finish each label as I progressed but with that recognition, I just needed to connect from one label to the next either above it or to one of its sides regardless of its state of completeness. As I progressed, I discovered that many of my pre-assembled labels fit nicely into my ever-growing label ladder. 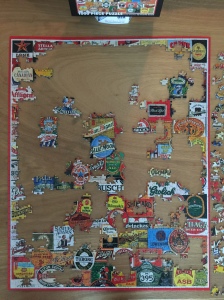 And once I reached the top, I began to then fill in the other labels as well as the missing pieces.

At this point, I used one of two techniques to complete the puzzle. I either focused on one beer label and searched for a single missing piece or I picked up a single piece from the remaining pieces and explored the box photo to determine where it should go. Even as the number of remaining pieces declined, it did not become any easier locating where each piece went.

Finally on New Year’s Day while watching Bowl games, I was able to finish the puzzle. It was with a sense of satisfaction that I gazed upon all of the beer labels. I never did count how many of the beers I had had but after staring at them for several days, I figured whenever I see one from the puzzle in my travels, that I have not had I will have to give it a taste.