The last weekend in July/first week in August my wife and I finally took a long overdue vacation. With me still working full time, most of my vacation days each year get spent teaching and visiting family leaving little time off for just the two of us. But that certainly got remedied with this trip.

My wife wanted to pick a place that we had never been before and one that was not too far away so we would not end up using a lot of my vacation time just driving there and back. Since she no longer works full time, she did the research and made our arrangements to travel to Dahlonega in the mountains of North Georgia, a place neither of us had ever heard of but an area which had a flourishing wine country. 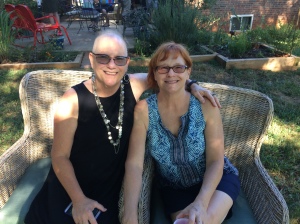 At the last minute, our vacation got combined with a quick trip to visit my wife’s dear sister in North Carolina for a celebratory party so we did not get to our rental cabin until late Sunday afternoon. Getting there was an adventure in and of it self.

Relying on the trusty GPS in my wife’s Subaru Outback, we had no trouble getting to our remote destination until the very end when our GPS directed us to basically follow what appeared to be nothing more than a footpath and fjord a creek. Fortunately our contact at the rental agency was available by phone that Sunday afternoon to reroute us to a less treacherous path. We had been told the last mile was a rough dirt road but this partially washed out road was actually an improvement over the one we were faithfully following on the GPS.

Our cottage could not have been more perfect. With a quant and cozy interior,…

…a deck overlooking the river,…

…a screened in porch for if the bugs started biting,…

…and a dock right on the river where we could enjoy breakfast each morning.

We could not have asked for more.

Our first night we drove into Dahlonega to eat dinner. When we pulled into the historic downtown square, we found that the old courthouse had been turned into a Gold Mining museum. This got me thinking way back to a time when our young family of five had vacationed in Atlanta and went to Six Flags over Georgia. I recalled a roller coater ride we all thoroughly enjoyed, the Dahlonega Runaway Mine Train (my kids were most impressed I had remembered the name of the ride).

A little research on my part confirmed that this ride was based on the old gold rush days that started in 1829 in North Georgia, the first gold rush in the US predating the one in California by over twenty years. It felt really satisfying to be staying in a place that we thought we had never heard of before but which turned out to have had a fun family connection many years ago. 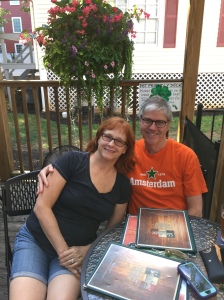 After wandering around the historic square for a while, we settled on an Irish pub for a hearty dinner. 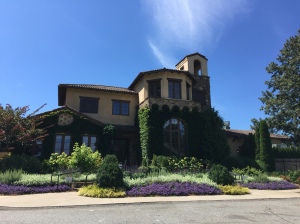 The next day, we hit our first winery, Montaluce, which had been described as a winery right out of Tuscany (more information about wineries in next post).

Our next stop was back in Dahlonega since many of the shops had been closed the day before. We took in the Mine Museum first where we finally learned the correct pronunciation of the town’s name (I recalled pronouncing the Six Flags ride as De Longa which was totally wrong, the correct pronunciation is “Dah-lahn’-e-ga”, native Cherokee for yellow or gold color). Having had a late lunch after our wine tasting, we decided to pick up groceries to cook out a nice dinner to have on our river deck. 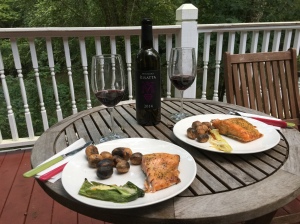 Our second full day was to take in one of my wife’s main objectives, getting to hike on part of the Appalachian Trail (AT), the southern trailhead for which, is less than 25 miles away. My wife found a portion of the AT that also had a fabulous overlook of a falls near by. We had attempted to hike a portion of the AT on a previous trip but had been foiled by blisters which developed on my wife’s feet on the three mile uphill hike just to get to the AT. This time we could drive the whole way to the AT path crossing, although the Forestry Service dirt road was described as “rough in spots”.

At times, I felt I was trying to drive our car on a washed out footpath with stretches where we could not exceed five miles per hour due to the rocky and washboard contour. Thank goodness for my wife’s all-wheel drive Outback! And when we came across an owl just sitting in the road (a special bird to my wife), we knew we would make it.

In spite of getting treacherously low on fuel, we found the AT crossing and hopped out for our adventure. The mile hike up to the falls was not too steep and when we found a sign along the way; we knew we had to get my wife’s photo.

And the falls were fabulous, being some of the tallest in the state.

After returning to our cottage to get cleaned up, we made it to our second winery, Frogtown, with a very large tasting room that overlooks the Blue Ridge Mountains.

On our third and final full day, we drove a short distance to Helen, GA, a cute little German town but probably a bit too touristy. My wife thoroughly enjoyed going through an antique store in a historic three-story house. It was a multi-level maze of displays, one that left me so overwhelmed, I had to just sit outside and read while my wife thoroughly explored it. Then it was off to our third winery next door.

Right across the road was an old gristmill, which on Saturdays, the old stone mill is water driven to grind the various grains. They had containers of cooked porridge and Southern grits for sampling, both delicious and of course we had to purchase.

At an old grocer in town, we had a quick lunch and then picked out some nice ingredients to have with our wine for dinner.

Returning to Dahlonega, we found our fourth winery and enjoyed another tasting overlooking the mountains.

That night we cooked our dinner to have on the porch of our cottage overlooking the river.

While dining, it gave us a chance to reflect on what fun our vacation had been. We both commented that it had not been one of those vacations of just sitting around and relaxing. Knowing that our days were limited, we tried to do as much as we could in the time we had. We agreed that it was not tiring at all but actually very enjoyable getting to see and do all these things in a locale neither of us had been to before.

We couldn’t say any one particular activity was our favorite as there were so many we had enjoyed. But for my wife, I know deep down one of her most pleasurable was getting on the AT, a goal she has had for quite some time of getting to hike.

At over 2,100 miles long, we only got a small taste on our short AT excursion but it will probably be motivation for her to take the next step (no pun intended). And since there were many more wineries we did not get to, I know we will plan another trip here sometime in the future.