In addition to my dad’s sermons that I brought home from my sister’s house last year, another item was a box of my mom’s old photo albums. My first task was to organize all of my dad’s sermons and once I completed that, I began to go through the old albums with the intent of scanning them to create digital copies. There was a box of loose photos and five separate photo albums. The loose photos and albums scanned the period from the early 1960s to 1996, an almost 40 year period ending just three years before my mom died. It turned out to be a trip down memory lane going through them all with some wonderful discoveries along the way; images that I never knew had even been captured on film. 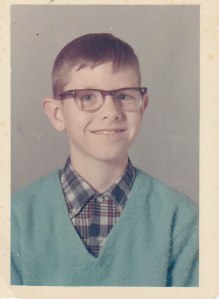 This is a school photo I found of myself from when I was in the 5th grade. I didn’t even recall seeing it before so it was a special find. 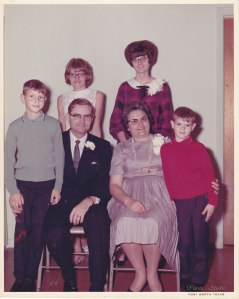 And here is one of our whole family taken at my grandparent’s 50th wedding anniversary. It was amusing to see how young all of us looked in the early 1960s.

The album from 1970 was so old that I was afraid I would destroy the photos trying to get individual photos out to scan. So I just scanned the entire pages. 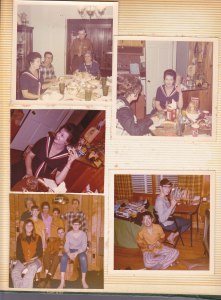 This first page captured a visit of my aunt, uncle, and cousin when they came to see us soon after we moved to Memphis. It was a bitter sweet memory when I viewed this page as almost as soon as they returned home after this trip, my cousin became gravely ill with hepatitis and spent many weeks in the hospital before thankfully making a full recovery but then almost within days of returning home, my aunt died of a brain hemorrhage. To further sadden this memory, my cousin, who was just a year younger than me died of a sudden heart attack before he even reached the age of 50.

The picture on the bottom right is actually the one happy memory as it is of me in my bedroom where I spent many an hour building car models just as I was captured doing in this photo. But certainly tempered by the sad events that unfolded soon after that visit. 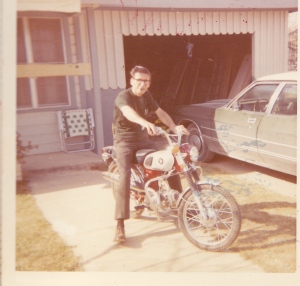 Also included in that album was a photo of my uncle sitting on my motorcycle at his home in Texas. I sold it to my cousin after we moved to Memphis as I never licensed it in Tennessee because of concerns about me driving it in Memphis, a much busier traffic city than the one from which we had moved which had a population of less than 10,000.

This is the only other photo I thought existed of my old motorcycle. 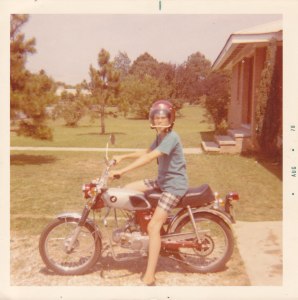 This is an even older image… 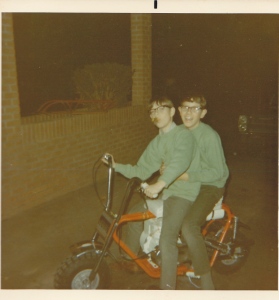 …one of my brother and I when we bought a mini bike that preceded the motorcycle. With our paper route earnings, we together purchased it when we lived in that small town and would ride it up and down our semi-rural street. 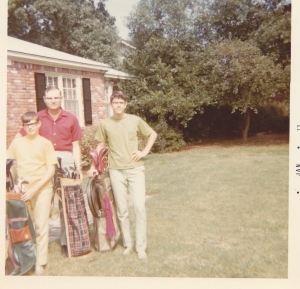 Here is a photo of my brother and I with our dad when we were learning to play golf together. This was one of the “father-son” activities my dad suggested we take up once we had moved to the “big” city with public golf courses available. This was obviously taken after that first outing when we learned that each player was supposed to have his own bag and set of clubs (the first time we golfed, all three of us played out of the bag pictured next to my dad). 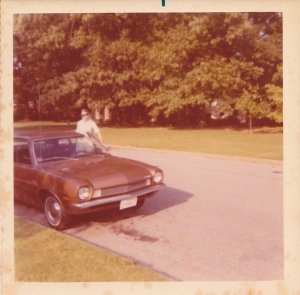 And this picture is special of my sister with her first car, significant probably much more to me than my sister as she let me learn how to drive a stick shift in her new car. 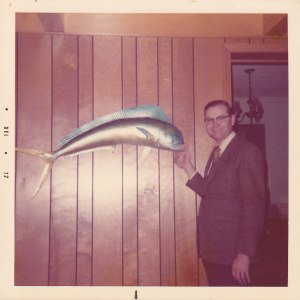 My dad was a huge fisherman probably going fishing almost every week of his adulthood. Here he is with the largest fish he ever caught, a dolphin landed on a deep-sea fishing excursion we took one summer on vacation in Destin, FL. 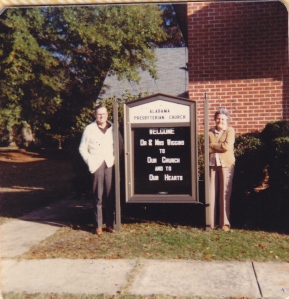 The next photo album jumped forward to 1980 the year my parents left Memphis and moved to a small community church in northwestern Louisiana. 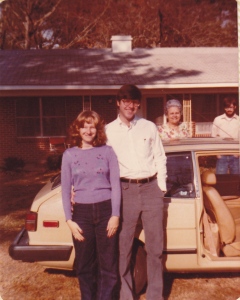 We made many trips there prior to my dad retiring in 1989. 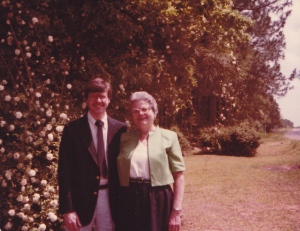 It was a relaxing, probably idyllic pre-retirement setting for my parents. 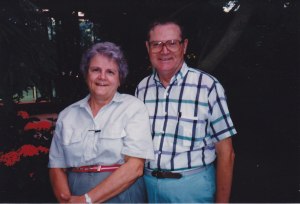 But when I opened the 1996 album and perused the photos, I was shocked at how much my mom had aged in the few short years since the end of the last album. 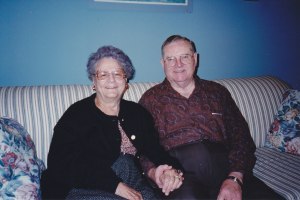 Some of the photos were even taken of her in the hospital as she had been in and out seeking treatment for numerous medical issues that arose as she neared the end of her life. Some of the photos brought tears to my eyes and I couldn’t bear to scan them, as I didn’t want to remember her that way.

As I closed the cover of that last album, tears running down my cheeks, I suddenly felt a tremendous sense of loss over my parents. On a daily basis, I probably don’t think about my parents what with me still working full time, having granddaddy duties, and maintaining a loving relationship with my wife of over 35 years. But it seemed that last album brought the death of my parents crashing down around me, a loss felt anew with fresh tears as I typed these words. 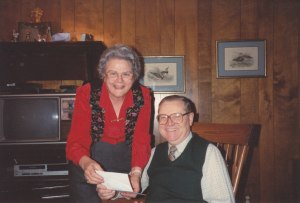 So I decided this was the memory I would try to etch in my mind of my parents, from December 1989, the year my dad retired and long before the medical conditions took their ravish toll on both my parents.

I miss you Mom and Dad. I love you and will always remember you dearly.