As long as I can remember, I have always loved car magazines. Of course this should not come as a surprise for someone like me who loves cars.

At one point after college (when I could afford it), I had subscriptions to the three big ones: Car & Driver, Motor Trend and Hot Rod. Occasionally they would review some of the same cars and so I enjoyed getting to read each magazine’s take on the pluses and minuses of a certain car.

But to clarify, while I am an avid car lover, I am not a car racer or car modifier and so over time, I found that I appreciated more the “sheer driving pleasure” editorial perspective of Car & Driver and so dropped the other two.

Over the winter, while rummaging around in my closet, I came across a dusty shoebox and cardboard box at the bottom of my closet. 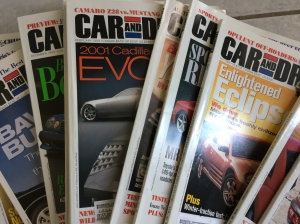 What delight to find that inside were some of my old car magazines dating back almost 20 years to July 1998! Not that a 20-year-old magazine with circulation probably in the millions and questionable increased financial value would be my source of glee, it was just that these old magazines held sentimental value for me. 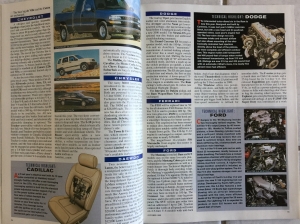 My favorite issue was always the new car issue that came out in either September or October of each year. Car & Driver would faithfully chart the changes over their glossy pages for the new models, confirm the demise of certain models, and include technical highlights for some of the more significant updates. I would use this issue along with ones specific to a certain car I was interested in to help make future car buying decisions. So rather than saying I was just hoarding old magazines, I was building a database archive of research material.

But the greatest find in my closet was this shoebox, which contained all of my Miata Magazines, the official publication of the Miata Club of America (now defunct). 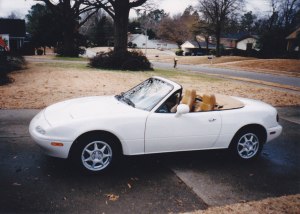 It was in 1996 when I bought my first Miata and as soon as I did, I joined the Miata Club of America. For the reasonable price of only $29 per year, you got a member sticker to put on your car and four issues of a magazine.

This was the first issue I got, not long after purchasing my car, which incidentally, just celebrated 20 years with me. I really used to love this magazine, probably the only one I would ever literally read cover to cover. This was no doubt because of all the cars I have ever owned; the Miata is my all-time favorite (I own two now).

The magazine included news of Miata club gatherings all over the world, tips on how to take care of your car, how to modify it (if you chose), stories by Miata enthusiasts and the fun they had in their cars, and of course lots of great photos of Miatas. In no other magazine would authors refer to his or her car as a Blue ‘95 and everyone would know exactly what that meant (down to the actual shade of blue and color of interior)!

One of my favorite columns to read in each issue was this one by Barbara Feinman where she chronicled her own story about her relationship with her Miata, at least until she got married, started a family and had to sell it since it was no longer practical.

Sadly sometime between 2003 and 2005, these magazines were discontinued.

Mazda stepped up and began to publish another magazine, with coverage expanded to include other sporty Mazdas and then this magazine morphed into… 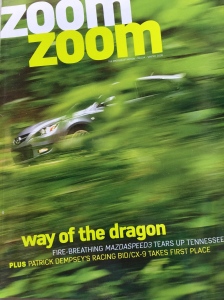 …which covered all Mazda cars. These later magazines would usually include stories about Miatas but other Mazda cars as well that I was less interested in reading about. It was sad to lose a magazine dedicated exclusively to my favorite car.

But in spite of the demise of the Miata Magazine, I still continued my subscription to Car & Driver. 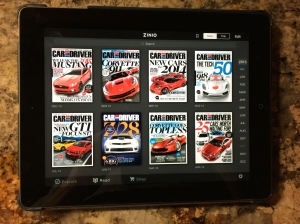 Then in 2013, in addition to their long-standing print version, Car & Driver began to offer a digital version of their magazine through a partner company, Zinio. It was incredible! It was a multidimensional digital publication that went left to right and top to bottom. 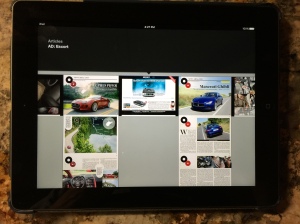 In addition, many pages had black or red dot hyperlinks that pulled up even more detailed information when clicked. But the feature that blew me away was for car comparisons, they included videos of the trials upon which the story was based. So rather than just reading about the test results, you could actually see the cars in action in a video. I’m sure it raised an eyebrow from my wife the first time I was reading an issue in bed when all of a sudden, engine racing noises emitted from my iPad.

They must have offered this as a one year trial to existing print subscribers because at the end of 2013, I was sent a bill for $25 or $30 to continue it for 12 months (over four to five times the reduced hardcopy price I usually paid). I declined and so switched back to hardcopy. 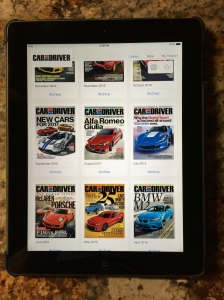 Then in 2016, Car & Driver began to publish their own digital version. It was not the multi-media version that I had received through Zinio, but it was offered at the same price as the hardcopy. I signed right up and have been receiving the digital version to my iPad every month since then.

I realize that by now subscribing to the digital version, I will no longer be saving hardcopy magazines that could possibly be valuable in about 100 years. I did google the value of one of my Miata Magazines (since they are out of print) and found they were going for about $15 a copy (about double the price I paid 20 years ago ($29 annual membership divided by four issues or $7.25 per magazine). So I obviously won’t be supplementing my retirement income by selling these old magazines. But then again, I won’t be piling up more old magazines in my closet that will just have to be cleaned out one day. So rather than leaving a bunch of old magazines to my heirs, I’ll just bequeath my iPad with all the digital issues.