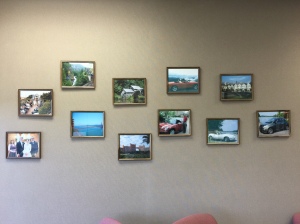 Some of the items that I will need to take home when I retire are these 11 framed photos hanging on my office wall. I cannot even begin to fathom how long they have hung on my wall, but I know they have moved from one office to another each time my office changed. Considering that I have worked at the same site and in the same building for over 30 years, they are probably quite old.

A close up inspection reveals that these are really cheap, 8” X 10” metal frames with a “faux-wood” finish.   I think I probably bought them at Target years ago. At least once when I moved into a larger office, which had a larger wall, I had to search for additional frames of the same design to expand my gallery.

Over the years, I would occasionally change out a photo for a newer one but with one exception, the photos were always either of my family (wife and kids), travel, or my cars. And the reason I know this is because each time I added a new photo, I simply put it on top of the photo previously displayed.

I recently took down each frame and took off the back just to see what treasures were hiding inside the frames.

In some, I found just a few photos but in others, the frame contained four or five photos. As I looked through the photos “archived” in each frame, I saw some of these images for the first time in many, many years.

Based on finding just four black and white photos, my earliest wall gallery must have only included four frames.

Once I started traveling internationally, I began to add pictures from my travels, replacing all of my black and white photos with color photos.

And as my travels increased, I needed to add additional frames to accommodate photos from all my trips.

When family members traveled with me on these international trips, they appeared in my displayed photos as well.

Sometime in the early 2000s, I began to display photos of my cars (at first two and then three cars in 2006) and then in 2011, I added photos from my two oldest children’s weddings.

As my travels continued, I began to replace old travel photos with newer ones.

In May of 2016 when I bought my latest car, I planned on replacing the picture of my Mini, which we no longer owned, with my new WRX.

But then just days later, I got word that my work site was closing.

So rather than adding to my collection, I began to think about what I was going to do with my photo gallery when I left. Since the frames are so cheap, I wouldn’t want to display them inside our house unless I invested in much nicer frames.

And then I came upon the idea of hanging them all in our garage over my workbench. After all, once I retire, I will be spending a lot more time at my workbench doing one of the things I love doing, working with my hands.

I’ve wanted to take down these shelves for quite some time since they just end up becoming a storage space for old paints and chemicals that are not even good anymore. Now I have a good reason to.

So rather than boxing up these old frames and sticking them in the attic or worse yet, throwing them away, they will simply relocate to one of my “new” office walls. Because after all, every time my office moved these gems moved with me. And so they will!

4 thoughts on “Photos on My Office Wall” Leave a comment ›