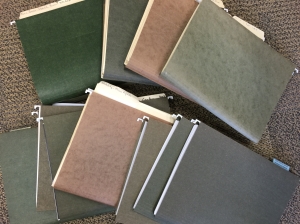 Even though my retirement is still months away, I have already begun to clean out some old files as the archiving staff will be leaving before my last day. I have been the head of Stability for over 25 years so some of my files go back that far. On the first day of our site-wide clean up, I began to go through some of these quarter century old files.

It was really interesting looking back at some of the reports I approved in 1991. Even more interesting was seeing the names of fellow workers from that period that I had not even thought of in probably almost that long. Sadly, a few of them are not still alive so as I ran across their names, it was with a touch of sorrow.

But as I thumbed through documents from some of the other companies we worked with in the past, it was joyous to see names of people I know now that back then were just another name on a report. It is truly amazing how small the pharmaceutical industry really is.

That first day, I only managed to clean out one 5-drawer lateral file cabinet so I have a number of other files still to go through before I’m done. I fortunately didn’t come across any original documents that would have to go through the lengthy archival process. I did, however, generate a lot of recyclable waste. I can’t image how many trips I made to the recycle bin but I know I met my Fitbit 10,000-step goal that day (I even had to search for additional bins as along with fellow employees, we filled up all the ones close by.).

In advance of this clean-up day, I actually started going through some even older files that dated back to when I first started working.

I ran across this photo of me that I think must have been taken for the company newspaper (remember those?). 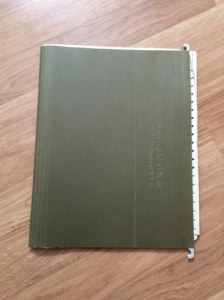 When I pulled out this file labeled “Programs”, I didn’t quite know what would be hidden inside. I was floored when I opened it.

Inside was a Basic computer program I had written to crunch method validation data. My boss, when I first started, was very much into computerization (this was 1982) and challenged me as one of my first special projects to come up with a program to perform these method validation calculations.

When I was in college in the mid 1970s, I had studied Basic programming in a calculus lab course I had to take. Back then, the computer we had was a mainframe the size of two deep freezers end to end. We hand wrote out our program (there were no word-processors) and then typed each line of code onto a punch card (e.g., 100 cards for a 100 line program). Our task was to write a program to take multiple inputs of student’s individual test scores, generate a semester average for each student, assign a letter grade, and then rank order the students from highest to lowest average. I had had no exposure to computer programming in high school so this first semester freshman class proved to be a challenging assignment that I ultimately was not able to finish.

Imagine my chagrin when my boss assigned this project to me, a task far more challenging than my college assignment. Maybe it was the motivation of wanting to impress my boss (or the fact that I was being paid to do this rather than just earning a grade) but I remember taking home books on programming in Basic and hand writing my program at the kitchen table. Fortunately less than a decade after college, we were working on a “mini-computer” using a text processor that could take our lines of code and compile them into machine language—no more punch cards—so once my program was complete, I typed it into the text processor.

Turns out writing it was a blast! I had to write several subroutines to perform the actual linear regression and to output the data in a table. I even figured out how to sort the data with a single pass through the calculated results, a functionality that had eluded me in college.

In the same folder, I also found that I had started writing a computer program to manage our family budget. Only problem was this predated the invention of personal computers and so I had no computer of my own on which to run this program. But for a more “legitimate” business use, I did find that I had written a program to track our golf league participant’s scores and total them up to determine the season’s winners. It was almost like that student’s test score program I never was able to write correctly in college, only with golf scores rather than test scores. 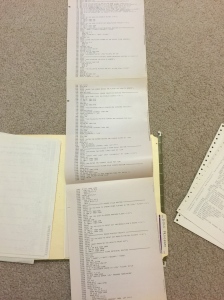 As I looked over these 34 year-old documents, I recalled the fun I had had writing these and the sense of pride that on my own, I had taught myself how to successfully program in Basic. It seemed that once I had slayed that old nemesis from college, I was bubbling with confidence to try even more.

I wonder on our next clean-up day what other treasures like these I may uncover that bring back such fond memories. I guess only time will tell.