Before you get all upset about animal rights violations, this is not a tear-jerk story about a beloved horse having to be put down. No, but it is about the sad loss of horsepower, which for me, is almost the same. This is a story about having to sell one of the cars from my stable of cars. And as any true car lover knows, it is a sad day indeed. 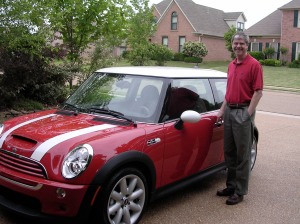 This new Mini Cooper S, with a super-charged—not turbo charged—170-horse power engine joined my stable in the spring of 2006. Prior to purchasing the Mini, a Mazda Miata, either a 128 horsepower ’94 or a 142 horsepower ’02, had been my daily driver for almost 10 years. And while I love the feel of the wind in my hair with the top down on sunny days, winters had gotten just too cold for me in a convertible (even with the top up). So I needed a hardtop for my winter car.

Ironically as much as I love cars and as many as I have owned over my lifetime, this was actually the very first car that I had ever special ordered to be built just like I wanted it. At the time, Minis had only been out for a few years and production had not fully caught up with demand. While it was sad not to drive a new Mini home the day I went to buy one, it was exciting to follow the production process of mine with the special website Mini had set up at the time. Each day, I could log in and see its progress through the factory in England.

After what seemed like a long six weeks, it was fun to meet my new Mini for the first time in the showroom where they had rolled it in for me to pick up. On the drive home, I could feel the power of those extra 30 horses kick in whenever I pressed the accelerator and the wonderful whine of the supercharger as I shifted through the gears was literally music to my ears (2006 was the last year for the super-charged engine so if you ever get a chance to drive one, do so with the radio off and the windows rolled down. For a car enthusiast, you’ll get a stereo sound better than any concert hall).

I didn’t tell any of our kids that I had ordered it so our youngest son was most surprised when my wife and I drove up in it to take him out to dinner for his birthday, literally the day I drove it home from the dealer.

This was also the first time in my life that I had two cars from which to choose for my morning drive into work (since my oldest son had “borrowed” my ’94 Miata), a real treat for a car lover. Each morning, it was fun to pick, though usually the weather influenced the decision (rainy – Mini, sunny – Miata). But just driving to work turned out to be the least of the fun I was going to have with this little car. 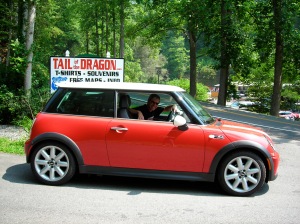 In 2007, my wife and daughter agreed to take a detour from our trip to NC for me to drive it on the Tail of the Dragon. In 2005, I had previously been exposed to that wonderful driving enthusiast’s road—318 curves in 11 miles—when my sister accompanied me to drive the Dragon in my ‘02 Miata.

While my wife and daughter sat in the café at the Deals Gap motorcycle resort, I took her out for a run. The Mini, with its four wheels pushed to the corners, and its 30 extra horses, gave me an exhilarating go-cart like ride that exceeded the thrill I had experienced in the Miata. The only negative of the day was as I was squealing all four tires around one of the sharp corners, I was met by a highway patrolman with his radar gun. Fortunately he had it pointed in the opposite direction and by the time he was able to turn and aim it at me, I had quickly slowed to the posted 30 mph speed limit. As I passed him, he just shook his finger at me like I had been a very bad little boy. 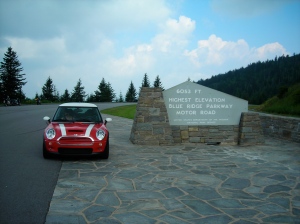 On our return trip home, I managed to talk my wife and daughter in to again going out of our way so I could drive the Mini on the Blue Ridge Parkway. They were very indulgent of a little boy with his new toy and I most appreciated it.

The next year, I took a “male bonding” road trip with my two sons—the youngest having just turned 21—to again ride the Dragon. With three drivers but only two cars (the ’94 Miata was in CA at the time), we swapped who was driving what. While I was driving, my son got some great shots with us as the lead car.

I don’t recall how many runs we made that day or the next but I do know it was a blast!

From 2006 to 2010, it was four blissful years of fun driving and then all that changed…to be continued.