If all goes according to plan, by the time you read this, we will have just completed our annual sibling sabbatical—SIBSAB—in Amsterdam! I have previously written on these get-aways that my brother and two sisters do every year. But this one has actually been years in the planning, years in the making, and even postponed once. 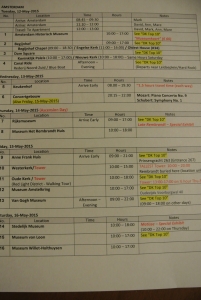 Our brother graciously agreed to create a travel itinerary that would allow us to get to do all of the things we each wanted to do. My brother and I have been to Amsterdam multiple times and so we knew of a lot of “must see” sights that we wanted to include. For our two sisters, this was to be their first visit so we wanted to make sure that they got to see all of their number one, number two, and number three attractions. And even though I have been to Amsterdam more than two dozen times and would be seeing many of my favorites, my brother included activities that I hadn’t gotten to do in my past visits as well.

One of the factors that made this a multiyear planning event was just figuring out the time of year to go. Even planning as far as a year in advance, coordinating four working adult’s schedules along with the family members they would be leaving behind is never easy but then one of the more challenging aspects was coordinating the timing to coincide with the brief two month opening of Keukenhof, (usually March 15th to May 15th), one of everyone’s top choice.

Admittedly we would be touring Keukenhof on the tail end of the season.   But it is almost impossible to pick the peak time to go since when the flowers are blooming quite literally depends on how cold the winter is. Holland typically has a fairly moderate winter but there are the occasional hard winters every decade or so when due to the length of the cold, the canals freeze over allowing their 120-mile Elfstedentocht (eleven cities tour) ice skating event along the frozen canals.

Less dependent on the weather but more on the time of year for tourist traffic are all the wonderful museums Amsterdam has to offer. And obviously these were high on our itinerary.

And visits to other museums of historical significance as well.

No first trip to Amsterdam would be complete without a canal boat ride in the long boats that offer a water level’s eye view of many of the sights in Amsterdam. 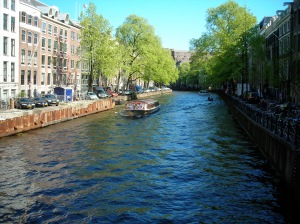 But we also wanted to allow time for just sitting on a canal and having a beer.

Typically on Saturday night, the locals hop in their boats and “cruise” the canals much like we did as teenagers in the US growing up cruising from one fast food restaurant to another to see everyone.

These were just a few of the things we planned for our trip. How it actually went will have to wait for a time when I am over my jet lag and can coherently put down my thoughts.