A sad event has been slowly taking place over the last several weeks. Although we knew it was going to eventually happen, it was still painful to see it occur—the demolition of the first apartment building we lived in as newlyweds 35 years ago. And unlike many painful events in our lives that occur quickly and are then over, this one seemed to drag out the pain for an extended period of time.

The grocery store next door to our high-rise building—the one originally owned by a local family where we used to shop and wheel their shopping cart from their parking lot right into our kitchen for unloading our groceries—had been taken over by a national grocery chain. And wanting to enlarge the store, purchased the high-rise property—our first apartment—with the intention of demolishing it and building a much larger mega store to replace the existing smaller store. For what seemed like months, we would drive by the fenced off vacant apartment building as preparations were made for its eventual destruction. Then one weekend in mid-June when we were down at our condo, we were surprised to find that the demolition had begun.

Knowing that this day would come, my hope had been that the building would be imploded and that it would be gone in the blink of an eye. But their destructive method was to be much more drawn out and thus all the more painful.

My first impression beyond the sadness this scene wrought was that it looked like the scared wound of a terrorist act, an image so common in our world today. Why did they choose to bleed our building slowly knocking the life out of it floor-by-floor and section-by-section? Was this a fitting end to the building where we shared the joys of first growing together as husband and wife? It was a sad emotional state I was in as I turned away from taking these photos and walked back to my car.

My next visit, only one week later, revealed more destruction. 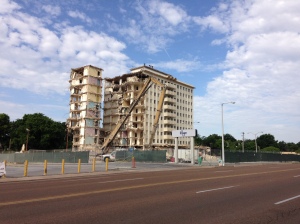 But it seemed that the building was possibly fighting back and giving the workers some trouble. 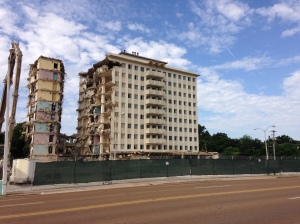 One section was almost separated from the main building, maybe proving too strong for the executioner’s crane. The exposed pink, blue, and yellow walls, no doubt the popular bathroom colors of the 60s had probably been reinforced to support the weight of the heavy cast iron tubs. And a week later, this now solitary column stood tall, vigilant as the rest of the building fell away.

But a mere three days later, this noble column, no doubt, a stalwart to the end, had succumbed to its planned fate.

As I shared these latest photos with my wife, the only positive comment that I could make was that our apartment, on the backside of the building, the one on the 7th floor with a balcony beneath the half curved awnings, was still intact.

But a week later, it too was gone.

The following weekend we didn’t make it by to see what was left but the day before I was heading out of town on business, I managed to get by our old residence. It was completely gone. 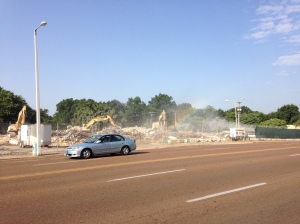 The workers were accumulating the rubble into piles to be hauled off and a water cannon was blasting the site with water to keep down the dust. It was comforting to note that in spite of the men’s savage destruction of this site, a colorful rainbow had formed over the empty space serving as that century’s old reminder that the visible light that we often take for granted each day, is made up of a hopeful promise—a promise of seven beautiful colors of better times ahead.

I have no more plans to visit the site now that our building is gone. But ironically, since our midtown condo is on the very same street, we’ll no doubt drive past the construction site as we make our way downtown. Eventually, I may be able to shop at that new, larger store built irreverently on the same site.   And when I do, I know I will seek out that particular spot in the store that rests on the footprint of our first apartment.

Maybe just maybe, if I am lucky, it will happen to be the beer isle. If so, then maybe I will be able to go home again, holding that cold beer in my hand and imaging us as newlyweds sitting out on our balcony in a cool breeze, drinking a cold beer, eating peanuts, and tossing the empty shells over the side of the balcony all the while watching reruns of the Mary Tyler Moore show on our tiny 13 inch color TV. Maybe I can go home again…