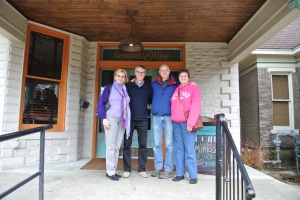 Two weeks ago, I got together with my brother and two sisters for the eighth edition of Sib Sab—our annual Sibling Sabbatical. And without fail, as in years past, we had to overcome difficulties to get together. This year, our two sisters didn’t have any weather related issues driving over from Arkansas as they have in the past but my brother did have trouble flying in from Philadelphia. However, having his flight delayed by over two hours and not having his luggage arrive with him didn’t daunt the beginning of our annual get together.

This year, we planned to stay in the midtown condo my wife and I bought and recently renovated.

And after picking up my brother at the airport, the first order of business was dinner at an Indian restaurant near by…

…and a run to the grocery store to load up on craft beer to enjoy over the weekend.

After an early evening on Thursday following everyone’s travel day, we started off Friday morning early with coffee and discussion of what all we would want to do. 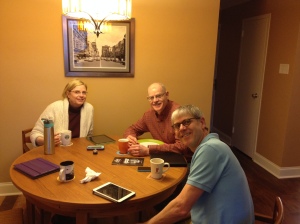 Sharing meals together is always one of the things we enjoy doing and so it was important to discuss and plan to ensure we could get the best of what Memphis cuisine had to offer in the brief time we had together.

With a rough outline of meal ideas planned, we next turned to talking about our families, always a fun topic for catching up with each other.

After a tasty meal at a local brew pub, we decided to get some exercise and walk to a cupcake shop which turned out to be a little farther than I thought (almost a mile each way).

We then spent the afternoon looking at my travel photos from 2013. My brother and I usually share a large number of photos from our business and vacation trips since they are usually in pretty cool places but this year I had an even larger number of trips to share from my travels in the prior year.

As I sensed my sisters were reaching the end of their tolerance for hundreds of photos, I just so happened to be showing photos of my trip to Seattle where my daughter had met my wife and I. After seeing the photo of my daughter getting one of my miniature phone chairs for her birthday, my sisters commented that one of the chairs would be a lovely birthday idea for them as well.

Talk about perfect timing. I jumped up and handed them each a bag containing their own chair I had made for them as an early birthday present.

That night, we ate at a local Mexican restaurant, a cuisine we always enjoy and one that dates back to our growing up with our parents.

On Saturday, we spent some time overcoming electronic technology challenges that often bewilder a generation in their 50s and 60s who weren’t born with an iPhone in their hand or a key board in their crib. We wanted to set up some shared photo streams so we could each have all the photos the four of us were taking over the weekend. We also wanted to figure out how to convert some scanned documents into a format that would load onto my iPad.

When we’d had enough of technology, we headed over to a new restaurant close by, Second Line, for a beer…

…and an extra special lunch—special because one of the appetizers for their New Orleans themed menu was Natchitoches Meat pies, a treat we had enjoyed on one of our previous Sib Sabs to Natchitoches. We were even more impressed when our server knew the correct pronunciation for Natchitoches.

But beyond the good food and good times together, for me, the highlight was going through the scanned copies of our parent’s old photo albums. One of our sisters had painstakingly scanned them last year and given each of us a copy for Christmas.

…and from their childhood growing up and then seeing photos of each of us growing up as well, some even for the first time.

After reminiscing about many of the memories the photos evoked, we posed for our traditional couch photo… 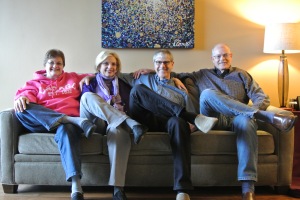 …and then went off in a totally new direction.

Sadly, our time together came to an end on Sunday morning when our two sisters had to drive back to Arkansas to prepare for work the next day.

With my brother flying out on Monday and with the weather finally turning nice, he and I spent the day walking around downtown Memphis and sharing a beer or two at some of our favorite downtown spots. 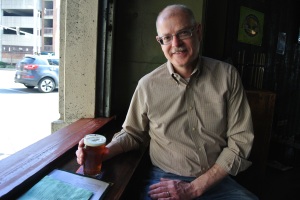 We earned those beers having gotten our exercise walking 4 miles along the riverfront. 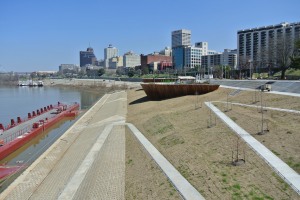 Our last fun excursion was to drive with the top down across the “new” bridge over the Mississippi River.

Since the four of us are usually only able to get together once a year, it is always sad when our Sib Sab is over.  But the sadness is muted somewhat since my brother and I had a chance to plan for our next Bro Go, a Disney getaway this December, and we all planned our next Sib Sab in 2015, which will be our first international one.