I decided to work on the most easily recognizable beer labels first, trying to place them in their approximate location on the puzzle.

As I pored over the pieces looking for the ones to a particular label I happened to be working on, I would occasionally run across other label pieces that I recognized went to another label and so began to accumulate them in one spot among all of the loose pieces.  As the pile grew, I was able to assemble many other labels off the board and then move them to their proper location.

It was very satisfying when I placed them in their correct location on the puzzle and found they fit with some existing pieces already in on the board, giving it the look of a partially completed patchwork quilt.

My big day for this puzzle was on New Year’s Day when I planned to watch college football and puzzle at the same time.  I actually spent most of the day doing this and didn’t feel quite so guilty as I normally would just sitting on the couch watching football since I was also accomplishing something—having fun!  By the end of the day, I had a lot to show for my efforts with only pieces in the four drawers left.

A few more short sessions over the next few days allowed me to complete this second puzzle.

As I stood back and gazed over the finished puzzle, I enjoyed the finished image but at the same time I had to acknowledge what I had been sensing during its completion; that my hurried poster board extensions did not work out as well as I hoped.  I found that I had to carefully fit in the pieces that were placed on the extensions while holding the poster board from beneath to prevent the collapse of the extension and the dislodgement of the previously placed pieces.  This technique completely eliminated that addictive puzzling feedback, that satisfying snap of a piece when it is placed into its proper location on a sturdy surface.  Probably wooden extensions would work better which would require further research and effort.

For my third puzzle, I chose to work on the one I had gotten for myself last year at the end of my puzzling season—one with a car and a train—another 24 X 30-inch puzzle.  And to avoid delaying the puzzle’s assembly while re-engineering my puzzle table extensions, I returned to the more traditional approach of just using a tabletop surface.

The puzzle table really helped to define the space where I could locate pieces prior to assemble and so to mimic that, I measured out the 24 X 30-inch space and then started sorting pieces.  After filling my tabletop, I pulled the drawers from the table to add additional space for pieces and even then, I was still left with the box bottom full of pieces.

With the edge pieces separated from all the others, I quickly built the frame and I think for one of the first times, had found all of the pieces to complete the frame.

I normally start at the bottom of a puzzle and work upwards from there but when I was assembling this frame, I found that the General Store building with the dark clapboard lines gave a nice reference line for easily picking the right pieces.  So, I started there. 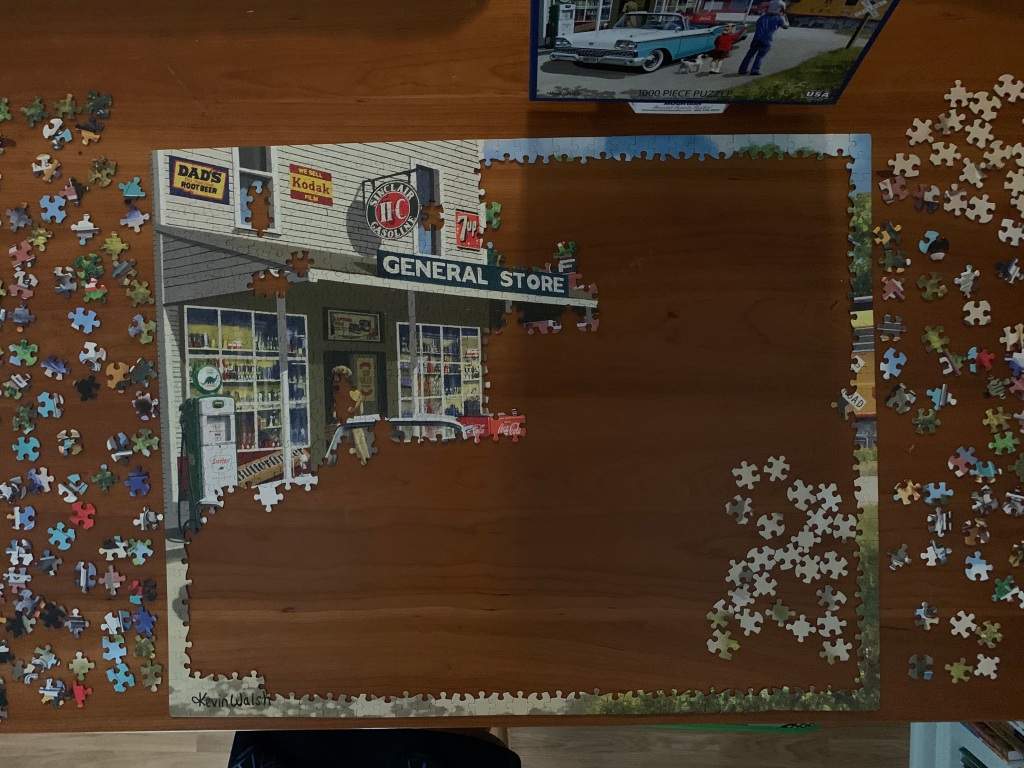 And once I had built the second-floor façade, the rest of the store assembly went smoothly as well… 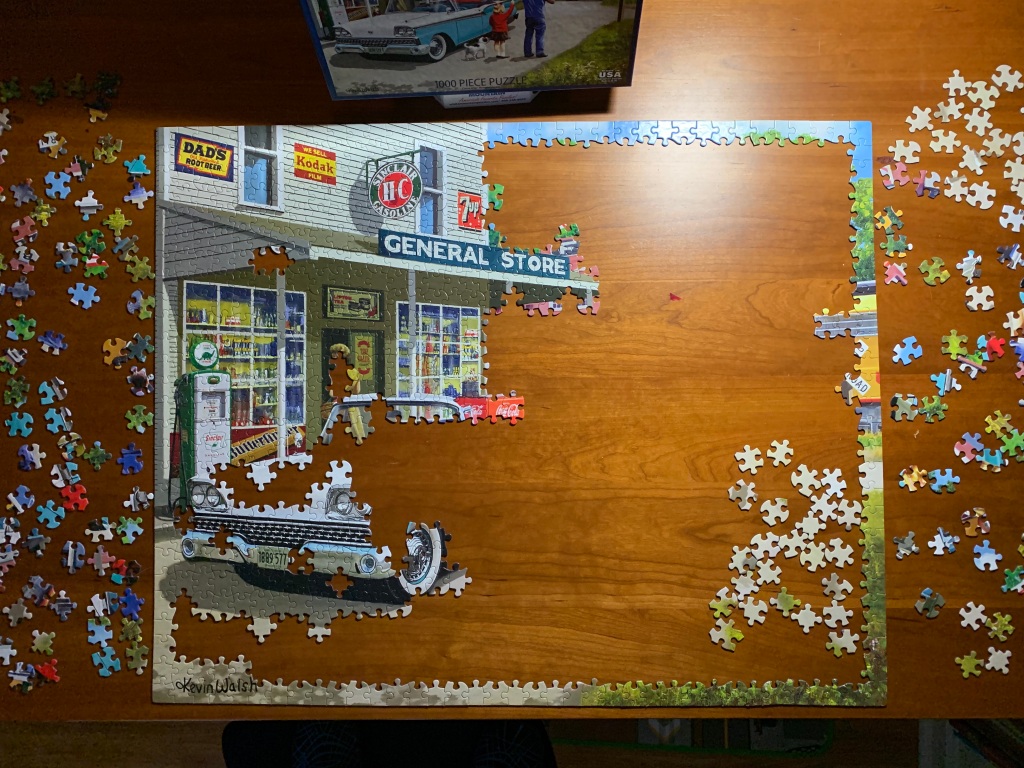 …which then flowed fairly effortlessly into the car.

Assembling the car, I realized that I really enjoyed puzzles that featured a car as I marveled at how the odd shapes and unique features fit together to make the whole car.

At this point, I had the background building to finish and then would be left with gravel pieces, grass pieces, and tree/sky pieces.

After the building was complete, I chose to finish the sky first as whatever leftover green pieces would have to be the grass. 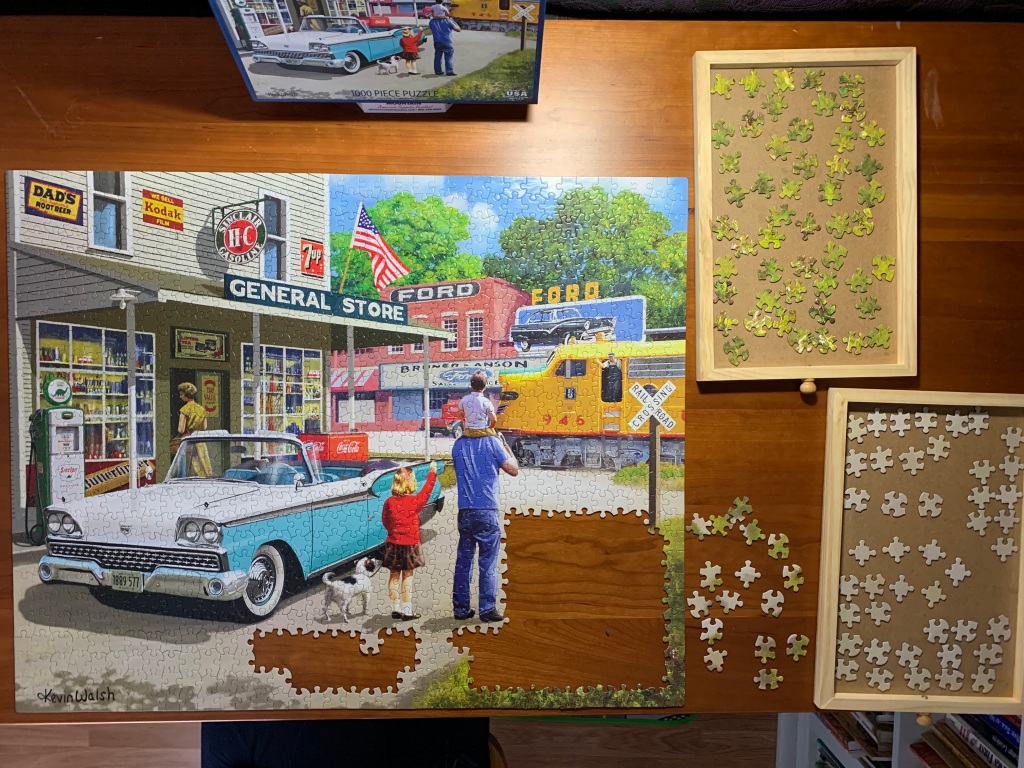 With these pieces separated into two of the puzzle table drawers, it didn’t take long to finish the puzzle.   As I ran my hands over the finished puzzle, I felt quite satisfied as this was a really fun puzzle to assemble.

For my fourth and final puzzle, I chose another one of the free ones my wife had gotten me, the one with the hot air balloons, which I happily discovered would fit on my puzzle table without extensions.  I approached this puzzle with a bit of trepidation as my brother had told me his family had tried over the holidays working a hot air balloon puzzle for a number of hours and had eventually given up.  After sorting the pieces, I began to assemble the frame and had a sinking feeling this puzzle might defeat me as well, something that has never happened to me. 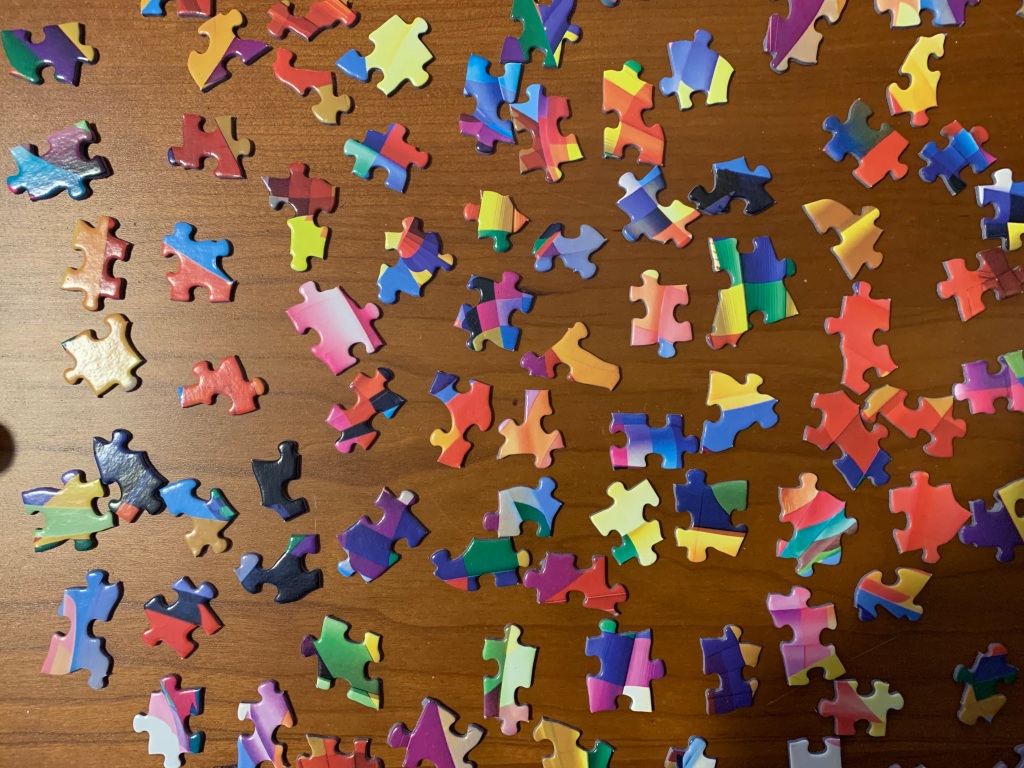 In addition to a large number of oddly shaped, multi-colored pieces, I couldn’t even find all of the edge pieces, never a good sign.

But I began anyway.  I started with the larger balloons since they had the greatest number of fairly similar pieces and whenever I got stuck, I would assemble some of the smaller ones out to the side and wait for their proper location to be revealed.  I would then return to a large balloon only to find many of the pieces I thought went to it were for another one.

What added to my frustration (this is supposed to be fun!) was that the colors on the box did not match the puzzle colors. 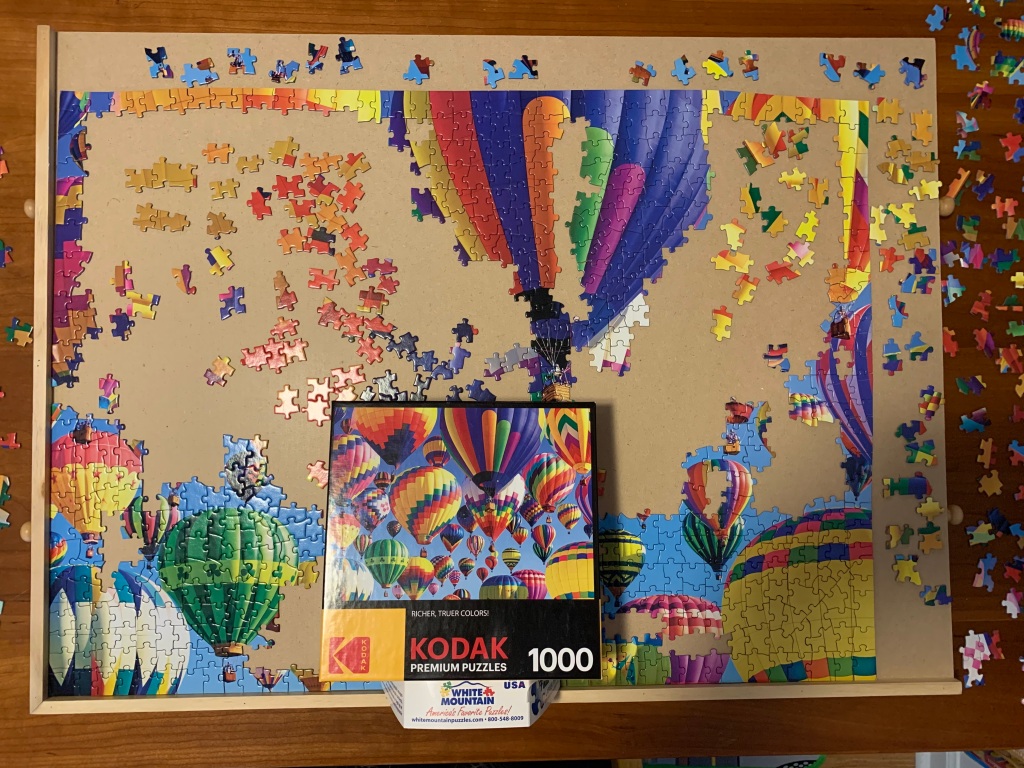 Many of the yellows looked green or brown and the whites looked dingy grey.  Obviously, the sun had been to the right of the photographer and the slight shadowing effect changed the colors on the same balloon from right to left.  At one point when I really seemed stuck on all of the balloons, I was on the verge of giving up.  But I got used to this complication and just accepted the fact that the next connecting piece might be quite different in color.

So, I continued to power through this puzzle, an hour here and an hour there (or two here and two there) and when I finally snapped in the last piece, I felt quite satisfied that I had endured one of my most challenging puzzles ever.

With four completed puzzles under my belt, I felt I had had a very satisfying puzzle season and with the purchase of two additional car puzzles (since I enjoyed that one so much), I set the stage for another fun puzzling season in winter of 2022!