I have always been enamored with the US space program, having grown up during the era of the space race and since becoming an adult, having read many books about it.

So when another book was published about it, I quickly added it to my wish list.  And when this book, Apollo 8: The Thrilling Story of the First Mission to the Moon by Jeffery Kluger, went on sale in December 2017, I immediately snatched it up adding it to my backlog of books to read for 2018 (Kluger is also author, along with Jim Lovell, of the exciting book Apollo 13).

Growing up, I followed the US space program closely with both scientific interest and national pride. Watching almost all of the Mercury, Gemini, and Apollo flights, I can recall, as many other Americans can, where I was while seeing the historic Apollo 11’s landing on the moon and viewing Neil Armstrong’s first step on that foreign world.

For many Americans, Apollo 11 and possibly Apollo 13 are their most memorable space flights.  So it was with inquisitive interest that I wanted to learn more about the significance of Apollo 8.  And what a story it was.

Apollo 8 was only the second manned Apollo flight after the terribly tragic Apollo 1 disaster.  At that time and previously in the decade, the Russians had been beating the Americans in every significant first in manned space exploration.  So it was a bold move when NASA announced a mere 18 months after the Apollo 1 fire that this mission would be the first manned flight to not only circumnavigate the moon nearly 250,000 miles away, but to attempt to place the three-man capsule in lunar orbit.

If successful, this December 1968 mission would not only catapult the US well ahead of the Russians in the space race, but would rejuvenate any hopes of a lunar landing before the end of 1969, as challenged by President Kennedy.  For NASA to take this course, there would be many activities planned for other flights that could no longer be trial run with the accelerated timeline. The first time any of these would be attempted would thus be during the Apollo 8 mission, which NASA quietly speculated only had a 50:50 chance of being successful.

This was a well-researched and well-written narrative of the successful flight along with historical background of events leading up to it.  Thanks to Apollo 8, for the first time, man saw the dark side of the moon, photographed the lunar surface from a height of 70 miles, visually evaluated up close, potential landing sites for future missions, and captured that now well-known and iconic image of “Earthrise,” the color photograph of the Earth rising over the lunar horizon.  Thanks to this book, I have an even broader knowledge of the US space program and a much greater appreciation for what Apollo 8 accomplished. 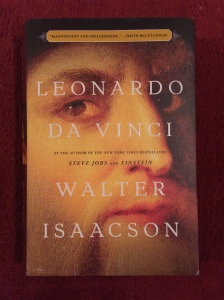 When I first saw this published book by Walter Isaacson, there was no question that I would want to read it having previously enjoyed reading three of Isaacson’s other books.  My desire was further reinforced by an interesting museum exhibit I had seen on Leonardo da Vinci’s inventions while in Amsterdam.  So it was with great and pleasant surprise when I discovered that my wife had given me the book for Christmas in 2017. 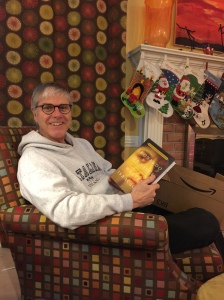 Upon lifting it from the box, I was at first puzzled by the heft of the book until I casually flipped through it and saw it included many high quality photos all printed on heavy bond paper. Although I typically read on a Kindle so that I can easily take my book with me wherever I go, I could quickly see that I would enjoy this book much more in its hardback bound version.  And enjoy I did.

Having only read one other book exclusively about an artist (Van Gogh:  The Life), I was struck by the contrast between the lives of the two artists. Further encouraging my interest in Leonardo’s history was the astonishing scientific approach he mastered in his art, just motivation for someone like myself that aspires to the merging of science with creativity.  This was manifested most visibly with all Leonardo’s calculated human proportions in his Vitruvian Man, that iconic drawing of a man within a circle and a square.  I was familiar with this drawing but I never understood its scientific significance until I read the chapter on it.

It was with uncanny coincidence that I just so happened to be reading the chapter on one of his most famous paintings, The Last Supper, during Holy week, over 520 years after the painting was completed and over 2,000 years after Jesus enacted the scene.  I repeatedly turned back and forth between the text and the photograph of the painting amazed at the complex perspective and emotion that Leonardo captured in his painting just moments after Jesus uttered the words that a betrayer was at table with them.  It was an insight I could never have gained even seeing the painting in person (although I would now love to do).  And the chapter on the Mona Lisa gave me a whole new perspective on this most famous painting.

But what was most interesting is that, like other artists of his time, Leonardo did not sign his paintings, as did most painters centuries later (such as Van Gogh signing with his characteristic Vincent).  Even in paintings clearly the work of Leonardo, debate abounded as to whether or not each detail in a painting was actually completed by Leonardo’s own hands.  Thanks to modern means of analysis and the thousands of pages of notebooks kept by Leonardo throughout his lifetime, many of his works can be validated from his sketches. But one intriguing example required a forensic analysis in one of the best “who-done-it” mystery approaches to authenticate a newly discovered painting in 2010 as one of Leonardo’s.

Isaacson’s extensively researched book does an excellent job of telling the story of Leonardo da Vinci as the truly amazing artist, scientist, engineer and architect he was, an archetype of the Renaissance Man—a genius!