I’ve always been interested in reading books about our US space program and to date I think I have read almost every book written by an astronaut or about the development of the program. Like other scientifically minded young boys who grew up in the 60s, I found each new NASA achievement fascinating and even built models of Gemini and Apollo rockets. So when I learned of Nathalia Holt’s book, Rise of the Rocket Girls: The Women Who Propelled Us from Missiles to the Moon to Mars, I thought this was definitely one aspect of our space program I had not read about.

Ask any Millennial today to describe a computer and we all know they will quickly launch into a discussion about a PC. But long before our modern understanding of what a computer is, a computer was a person that computes. This book tells the story of the women who were hired and worked at the Jet Propulsion Lab (JPL) in Pasadena, CA to perform complex mathematical calculations by hand using paper and pencil.  And since JPL got its start developing rockets on the grounds of Caltech, a campus I am well familiar with since my son-in-law did his post-doc there, I was taken in by the story as soon as I read the description of one of the rocket girls heels clicking on the red brick walkway as she hurried away from one of the accidents by the “Suicide Squad” that ultimately led to JPL being kicked off campus.

It is sad to note that it was partly because of a sexist attitude that ensured all of the computers at JPL were women for many of them came in with the same qualifications as the men who were hired as engineers. But in the 1940s, the men were engineers and the women were computers.

One of their original projects was to design rocket engines that could be attached to propeller airplanes during the war to enable heavy bombers to launch from the short deck of an aircraft carrier. Their hand calculations helped elucidate what fuels provided the most thrust. As the war ended, their math skills turned to calculating what it would take for a rocket to escape the earth’s atmosphere and launch a satellite into orbit. Sadly due to politics, JPL was barred from launching their developed satellite upon a four-stage rocket of their own design. We all know the Russians beat us in 1957 launching first Sputnik and then Sputnik II. Had JPL been allowed to launch when it was ready, the US would have beat the Russians by over a year.

As electronic computers became available, for some tasks, the Rocket Girls traded pencils for keypads and became the first computer programmers typing commands onto punch cards (ones I can remember using myself in college in the early 1970s). But the girl’s accuracy was no less important as a correct guidance program handwritten at JPL in Pasadena incurred a single transcription error when a male engineer in Florida transcribed the code onto punch cards omitting a single superscript bar which caused the rocket to be destroyed in flight shortly after being launched.

The main reason that I had not heard of the Rocket Girls is because JPL did not directly support the manned space missions. JPL only supported unmanned projects. But it was their exploration of our two closest neighbors, Venus and Mars with the Mariner missions in the 1960s that ended centuries old speculation that these planets were inhabited by living beings. And without the Ranger program sending probes to the moon, NASA would never have known the Sea of Tranquility was a safe place for man to land on the lunar surface.

JPL would go on to make further scientific history with the Voyager and Cassini missions sending probes to the outer reaches of our solar system. And as JPL progressed, it was satisfying to note that the Rocket Girls were eventually reclassified as engineers, a title they were duly worthy of and decades later, still staffed solely at JPL with women. 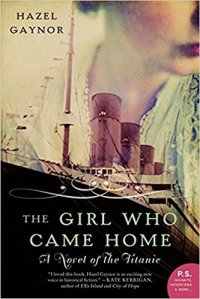 Once again, I have BookBub to thank for bringing to my attention this book as one of their daily specials. I have always been fascinated about the Titanic story and when Robert Ballard discovered the sunken ship (an event even featured in this novel), and published his incredible photos of the sunken ship, it simply whetted my appetite even more. What first caught my eye for this book was not so much the title but the famous four-funnel ship image on the book cover. In fact, the title, The Girl Who Came Home: A Novel of the Titanic by Hazel Gaynor, actually gave me pause before pushing the $1.99 purchase button thinking that it might be just a “chick lit” novel. But for me, it turned out to be a most enjoyable historical novel that cleverly interweaves actual Titanic events, real life passengers and crewmembers with fictionalized characters based on real life persons. The dedication page to the Addergoole Fourteen at the beginning of the book, confirms that there really was a group of 14 Irish men and women from a single Catholic parish in a small village in Ireland who set sail on that regretful maiden voyage.

Knowing that more than 1,500 people lost their lives and only about 700 survived, there are probably over 1,000 different Titanic stories of real people’s lives that could be told but not many of them that could have been as intriguing as this one. In this book, the story leaps back and forth between April 1912 and April 1982 overlaying a captivating human drama onto the actual events familiar to anyone who has read Walter Lord ‘s landmark book, A Night to Remember. The story centers around one of the last women, a third class passenger no less, to step into a lifeboat that fateful night and her great-granddaughter 70 years later. It is a tale of discovery for both women whose lives unknowingly paralleled each other, and in spite of unfortunate happenstances for both, ultimately led to a fascinating and surprising climax. If events of the Titanic disaster interest you, you will absolutely enjoy this book.