After years and years of anticipation and months and months of planning, I retired last week. This is a self-photo I took of myself in my office on my last full workday. While my last official day was the 27th of October, I was actually on vacation for seven days before that so my last real work day, the day I took this photo was the 17th of October.

So what was it like on my last day? Well it was a day mixed with emotions of happiness but also sadness. After 35 years working in the same location and even in the same building, it should not come as a surprise.

The day before, I had sent out a mass e-mail saying goodbye to all of my work colleagues—those who were remaining behind as well as those who were moving on to other activities (some of which were also retiring). Part of my last day was spent reading the very touching responses I received from many reflecting on our productive and instructive work life together and wishing me well in retirement.

Another part of my day, I spent touring other floors of the building I had worked in all of these years. I decided to go by all my old offices that were on the four different floors I had worked on. Some still looked the same but others were no longer there having been torn down to make space for an expansion of our laboratory operations. Touring the labs was a bit sad as all of the equipment had been boxed up and relocated to other company sites. This was a part of the process of closing down our work site, the main reason I was retiring at this particular time.

But the most distressing sight I saw on my tour was when I came to our stability chamber area. When I rounded the corner of the second large room where many of these chambers were located, I was met with a gutted room. What previously had been our first chamber expansion area that housed four walk-in chambers and four large reach-in chambers were all gone. All that remained were the water, air handling, and electrical utility connections dangling from the ceiling, like bloody tendrils from savagely excised appendages. For 25 of my 35 years, I had responsibility for our stability program and these chambers had incubated the thousands upon thousands of samples at a multitude of environmental conditions. It nearly brought tears to my eyes.

One bright spot though was an unexpected visit by my youngest son who lives in town. He stopped by to ask me some questions about a research project he was working on and after his questions were answered, I gave him a tour of the two remaining floors that were still occupied. It was his first visit to my place of work in many years and he was amazed at the changes that had occurred. As we ended our tour, he suggested we get a selfie, which thanks to his rather long arms, hardly even looks like one.

After calling into my last teleconference of the day, I began to box up my few remaining personal items. After more than 35 years in the pharmaceutical industry, I had accumulated a number of reference documents and texts that I planned to use in my “retirement.” Many of these I had taken home the previous day so that when I walked out for the last time, it would only be a single trip with the one box.

My Bose speaker that I continuously played jazz music and my two phone chairs, where my work and personal phones reclined while I was sitting at my desk, mostly took up the box. I know my daughter will recognize the thermal mug on the left; the one I drank ice water from all day long at work for at least 15 years. I got this mug one year in the early 2000s when I picked her up from college after the close of a semester. 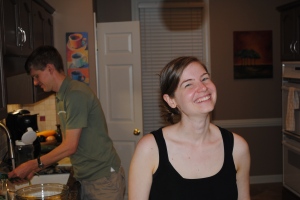 Over my 35-year career at this location, I spent 32 years in management. My first three years, years that I absolutely had had a ball, were the years I worked in an analytical laboratory. When I was cleaning out my desk, I found this spatula that I had used many years ago to weigh out milligram quantities of samples and standards. 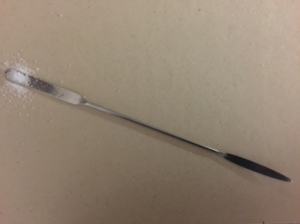 Knowing that I had used this tool on a daily basis whenever I was working in the lab, I decided to take it with me as a memento of those really fun days in the lab.

Tomorrow starts the first full day of my retirement, a period of my life I have been looking forward to for some time—a time of freedom, a time of relaxation, a time of adventure, and a time of unexpected pleasures. But none of this was I thinking of that last day. No, my thoughts as I drove away were about the three phases of my life. The first phase was the years of educational preparation for work; the second phase was my professional career; and the third phase being my retirement years. All of us spend a different number of years in each of these depending on our level of education, our career, and ultimately our life expectancy.

As I zoomed down the road on my way home, I thought this was indeed the end of an era. But at the same time, it was just the beginning of a whole new exciting phase of my life. 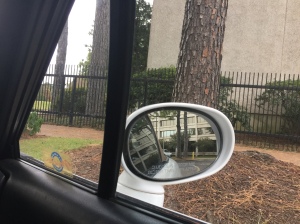 As a view of my office building receded in the passenger’s side mirror, in spite of the iconic phrase that “OBJECTS IN MIRROR ARE CLOSER THAN THEY APPEAR”, I shifted my gaze forward through my windshield to the next phase of my life—retirement—which was now closer than anything in my rearview mirror.

Leave a Reply to DebbieCancel Reply