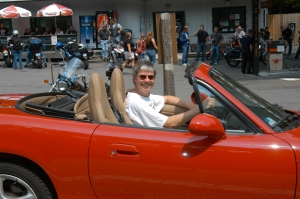 For someone who has always loved cars, it is surprising that it wasn’t until I was in my 40s before I started going to major car shows.  My earliest recollection of attending a car show was when I was a pre-teen living in a small town in Arkansas.  One day, my dad asked me if I would like to drive up to Little Rock on Saturday to go to their car show.  I was so excited.  Dad also said after the show, we could go wherever I wanted to go for lunch before driving back.  It was to be a day for just the two of us.

Since it was my first car show, I had no idea you could actually get to sit in each of these cars.  I don’t know how many I sat in that day but knowing it was the mid-60s and the golden age of muscle cars, I must have sat in numerous Mustangs, Camaros, GTOs, and Chargers—cars I could only dream of owning one day. 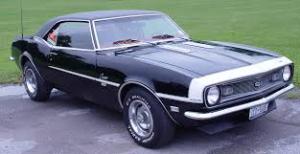 I don’t recall where we had talked about eating after the show but as we were walking back to the car, me in a cloud, we walked past a cafeteria and I asked Dad if we could eat there.  He hesitated a moment probably thinking of where we had already planned to go and then said sure.  I don’t know what drew me to that cafeteria—not a particularly exciting choice when I knew I could go wherever I wanted—but I just knew it was the right place to eat and relish the memories of the show while they were still fresh in my mind.  It was a wonderful day and one I can still picture in my mind’s eye even though it was many years before I would attend another car show. 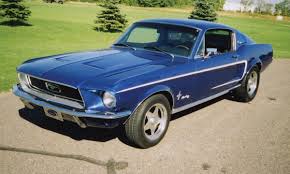 In college, I would sometimes attend my hometown auto shows, which were a bigger affair than the Little Rock car show but still nothing major.  After I married and had a couple of boys, both of whom were interested in cars, we too would attend the annual car show in town.  But it was in 1999 that I attended my first major auto show, the North American International Auto Show or by its more common name, the Detroit Auto Show.

It was actually serendipitous how it all came about.  I was talking to a colleague of mine at work one day about car shows and he mentioned he had been to the Detroit Auto Show several times while he had lived in Michigan.  He talked about what a huge show it was when all of a sudden I realized I could fly up there for the show.  I asked him if he would be interested in going again and he was all for it.  So we made plans to attend the show in January of the following year and proceeded to make airline and hotel reservations for my two sons and us.

On Monday of the week we were supposed to fly to Detroit, a blizzard hit Detroit.  It paralyzed the city for four days.  We were to fly to Detroit on Saturday morning and midweek we began to wonder if we should cancel our trip.  On Friday, we heard reports of the highways being re-opened and so decided to take our chances.  We flew up without incident but once we arrived at the car rental lot, we could see how severe the storm had hit.  There were mountains of snow piled up everywhere, some cars still buried by several feet of snow.   Fortunately our car had been cleared of snow and the interstate route into downtown was open and so we made it to the show. 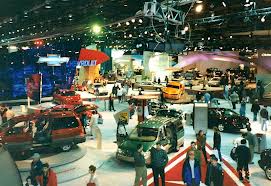 When we walked in the door, I couldn’t believe my eyes.  Everywhere I looked were huge displays of cars—not just cars currently for sale but pre-production models of cars coming out that fall and concept cars galore.  I was seeing cars I had never seen before and seeing one-of-a-kind cars that I might never see again including Italian exotics made by Ferrari and Lamborghini—cars that had never graced the streets of our hometown.  And due to the blizzard, many people had canceled their trip to the show and so we got to see these cars up close without a crowd.  It was just incredible.

I think we probably stayed at the show about five or six hours.  I remember at one point standing at the top of some bleachers set up for the show and looking out over the entire COBO hall and thinking, this was like heaven for a car lover.  I didn’t want to leave but hunger finally overtook us all.  We trudged through the still snow-covered streets of downtown to the only diner still open for business.  Over dinner, we couldn’t stop talking about what an incredible show it had been.  Sadly, I didn’t even think to take a camera to document this first visit.

Due to the huge success of our first trip, we began an annual pilgrimage returning to the Detroit Auto Show in January of 2000, 2001, 2002, 2003, and 2004.  On most occasions, it was snowy and cold.  But in the years with more temperate weather, the crowds were huge. 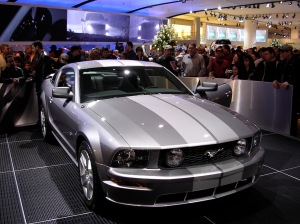 While at each of these shows, we would get to see concept cars and pre-production versions of retro cars—Mini Coopers, Ford Thunderbirds, Ford Mustangs—often the crowds prevented of us from getting very close to most cars.  I recall once just trying to get into the flow of foot traffic in the aisle to move to the next display and feeling like I was being squeezed through a tunnel at a mobbed sporting event.

For someone not a fan of cold winter weather, the necessity of having to deal with snow and ice each year finally proved too much for me and so we ended our annual January pilgrimage to Detroit.  But after six years of the Detroit Auto Show, where could a car lover get his fix for major car shows that didn’t involve traveling to the frozen North in the dead of winter?