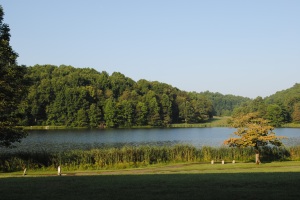 The next day, the weather was perfect for a top-down drive.  Knowing that I would be sitting in the car all day, I decided to take a short run to get some exercise before I hit the road.  No sooner had I started than I ran across a “Beware of Bears” sign.  In the city, I never think about running and having to watch out for dangerous animals, just cars.  I think I might have run a bit faster than normal that morning frequently glancing over my shoulder to be sure a bear looking for his breakfast wasn’t following me.  After a shower and a great country breakfast of my own, I was ready to set off, but not before purchasing a 75th Anniversary t-shirt to commemorate my experience! 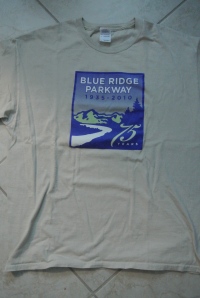 In no time I was driving past views where the mountains soared above the clouds, a feature the Smoky Mountains are most known for. 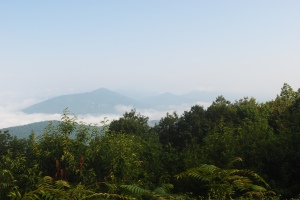 My next stop was another spot I had never been to before–supposedly the most photographed spot on the BRP–Mabry’s Mill that sits right next to the BRP.

After parking, I just had to wait for the lawnmower to get out of the way so I could get some pictures.  But freshly mowed grass just added to the quality of my pictures; I took a number from different perspectives but thought this one was the best shot. 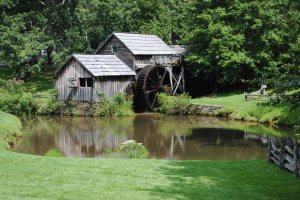 After a quick picnic, I continued my journey.

There was a multitude of scenic overlooks along the way but after stopping and getting out to take several shots, I decided it would be more fun just to view them from the car as I casually drove by at the posted 45 mile per hour speed limit.  For this was not a road to speed on.  It was a road to savor the views and I would allow my mind rather than my camera’s memory card to store these images.

It was after leaving Mabry’s Mill that I ran across my first construction zone.  In several locations that day, only one lane was passible and so I would have to wait in a line while traffic from the other direction cleared before following the construction lead truck through the construction zone.  I was pleased to find that the road was being well maintained but surprised that so many sections were actively under construction considering this was their 75th anniversary.  I can only assume that politics had delayed getting ready for the celebration.  A year before I planned my trip, I had gone to the BRP website and found a section where construction zones were listed.  I just failed to check it again before my trip never thinking it would be still going on during the 75th celebration.

As I neared Asheville, NC, my destination for that night, I stopped to capture a shot of the Black Mountains, a range that lent their name to Black Mountain, a small town for which I also had fond memories from my childhood.  I always assumed the town had been named for a black mountain, now I knew where it was.  In my eagerness to reach my night’s destination, I passed without stopping, another beloved childhood destination, Grandfather Mountain.  From previous visits to the summit, I could visualize in my mind’s eye the view from the top but now was able to reflect on the great controversy that raged here during the building of the BRP due to commercial development that had been established prior to the building of the BRP.

As I left the cool mountain air of the BRP and entered Asheville, I realized as the sun warmed my face that I had apparently gotten sunburned while driving all day with the top down.  I planned on spending a couple of days in Asheville, Black Mountain, and Montreat to visit some of my favorite childhood spots and to spend some time not driving.  Little did I know that something more painful than sunburn awaited me on my third and final day on the BRP. 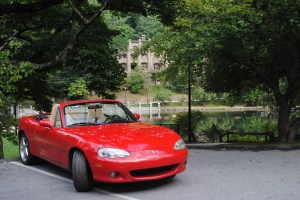 Leave a Reply to DavidCancel Reply