Fortunately I didn’t have to wait long as I had a trip planned to Amsterdam for that October.  The day before I left, I took a photo of the prints with my camera.  This was not to confirm its identity; that we already knew.  My goal was to take photos from the exact same perspective of the building in the print.  And to do that, I would need a copy of the prints.

A real downside to having only a couple of days to sightsee is that plans can become very tenuous due to weather.  On more than one occasion, our plans had been foiled by rain or bad weather.  I set out on Sunday morning in spite of grey, overcast skies.  On the train ride north from Amsterdam, the skies darkened and it began to rain.  I feared that my plans would be ruined again.  Tensely, I watched the weather out the window, as I grew closer to the Hoorn Train Station.

Fortunately by the time I arrived, the rain had stopped although the skies still looked grey and ominous.  Undaunted, I set off on foot with my camera and an image of the google map emblazoned in my mind’s eye.  I knew I needed to walk east from the train station about three fourths of a mile.  Using only dead reckoning and a good sense of direction, I walked through the town and towards the water.

I came out from between some buildings and found a pier with boats floating on the water but no building.  Puzzled, I walked to the north along the pier.  When I came to the end of the pier, I looked to my left down another road and there stood my building.  Feeling relief in finding it and in the rain holding off, I walked the last block to my elusive prize.

The first thing I noticed was that the town had been built up around the building.  I thought that would just add interest and show the lapse of time—I recalled seeing early pictures of the Concertgebouw Orchestra Hall in Amsterdam sitting all by itself when built in the late 1800s and marveling how the city had grown up around it over the span of a hundred years.

I then realized I couldn’t take the same photo.  I would probably have to be in the kitchen of the corner restaurant I backed into to be at the right distance from the building for the photo.  Hoping to get the best picture I could, I pressed myself up against the window of the restaurant as much as I could and took several shots.  It was as close as I was going to get to the original. 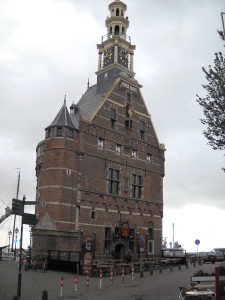 I next decided to capture the seaside photo.  Surely I could get this one at the right distance.  But here again, it seemed I couldn’t back far enough away from that side either.  Maybe the pier had been longer when the print was made.  I took several photos and hoped for the best.

I decided to take a few more photos around the little town.  I found one of a drawbridge that framed the building but I could tell the overcast skies were not giving me good lighting for my photos. 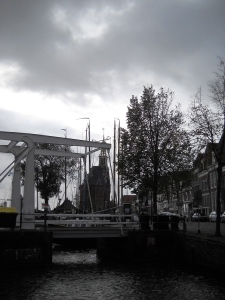 When the rain started back up, I decided to seek cover at a restaurant close by where I had a delicious open-faced sandwich and a cup of strong Dutch coffee before my return to Amsterdam.

As I boarded my train back, I felt a sense of elation of accomplishing my task.  And while it wasn’t possible to capture the exact same photos, at least the rain held off long enough for me to feel I had successfully completed my mission.

When I returned home, I printed out some of my pictures and began to compare the building from the prints to my recent photos.  It was apparent from scrutinizing both that some changes had been made to the building over the years.  But in spite of a few alterations, it was obvious that the building had remained mostly intact.

I decided that the best way to display my new photos would be to frame them in similar frames and hang all four together in a single grouping.  So before our son’s next visit home, I had them framed and grouped them into a “before and after” arrangement.  When my son arrived home, I was proud to show them off.

I don’t know if my son realized what an exciting adventure his gift had created for me.  What had started out several years earlier as simply a birthday and father’s day present had resulted in a multi-year quest to track down and photograph an elusive building from years ago.  For me, it made the gift even more special that it had turned into a transcontinental journey to one of my favorite countries to explore.